Marianne Peters, Army of the Dead

Marianne Peters is a helicopter pilot tasked with flying the Las Vengeance mercenary team out of zombie-infested Las Vegas after retrieving $200 million in cash for Bly Tanaka.

Peters was an early member of Las Vengeance, a search and rescue team that saved many people from the clutches of the zombie infection in Las Vegas.

This article contains information from media that has yet to be released, and so is likely to have information gaps!

After the city was walled off, Peters began working as a helicopter pilot and/or mechanic somewhere in Albuquerque.

Working with helicopters in Albuquerque, Peters hated her life. When her old buddy, Scott Ward arrived to offer her $2 million for her participation in a mission, she agreed before hearing out the details. She met with the returning members of the Las Vengeance crew, along with several new faces. Her job would be to get a helicopter working to fly the team and money to safety. As they entered the abandoned city of Las Vegas, they were soon approached by Valentine, the zombie tiger. Peters commanded a couple of the new faces to hide behind the cars. They continued deeper into the city, aiming for Bly's Casino. When finally arriving, the team split into four groups, with Peters heading to the roof to find Bly's rescue helicopter with Maria Cruz as her support. Finding the helicopter to be a hunk of junk, her work was cut out for her.

She worked at the helicopter for quite a while, assuring Scott that things were going well so he and the others could stay on mission without worry. Things went south below, and when the team returned for the flight home, only Scott and Lilly remained. They were quickly followed by Zeus, who was held off by Lilly's threatening of Athena's head, allowing Scott and Peters to escape. Scott told Peters the plan had changed, and they needed to go to The Olympus before escaping, to which his daughter, Kate Ward had run. She reluctantly flew Scott to his daughter, but decided she'd leave to save her own skin. Scott and Kate arrived to find Peters and the helicopter gone, but Peters' conscience got the better of her, and she returned to pick them up. Her delay allowed Zeus to catch up again, and so he was able to board the helicopter with the others. During Zeus's struggle with Scott, Scott's weapon was accidentally discharged, shooting Peters through the chest. Despite her wound, she continued to attempt to fly the helicopter away.

When the nuclear strike hit Las Vegas, the shockwave hit the helicopter, knocking it out of control. Upon crashing, Peters was impaled by a helicopter blade, instantly dying.[1] 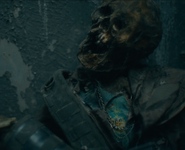