"... as Vegas was walled off with the zombies left inside to haunt the abandoned city."

News broadcaster, Army of the Dead

Las Vegas is a city in the U.S. state of Nevada. It's sequestered from the surrounding area and has been taken over by the Las Vegas horde, making it a very dangerous place into which to venture. 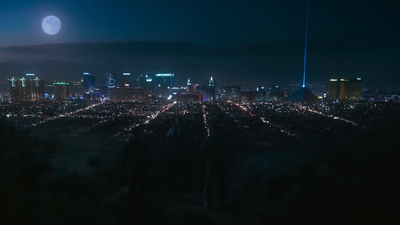 At some point a mysterious zombie outbreak occurred in the city, causing its inhabitants to go feral and attack each other. Scott Ward, Maria Cruz, Vanderohe, and Marianne Peters formed a rescue team to protect what they loved most.[1]

The city was later quarantined, and the zombies eventually formed an organized horde led by the more intelligent alpha variants.[2]

Bly Tanaka hired Scott Ward and the rest of his previous rescue team to go back into the undead city to pull the greatest heist the world had ever seen. They came into conflict with the zombie society, and shortly afterwards a nuclear bomb was dropped on it, destroying the city.[2]

As seen from the roof of Sodom (Bly's Casino)