Bly Casino, also known as the Vegas Bly, was a casino owned by Bly Tanaka that housed $200 million in cash in the Götterdämmerung vault. It's comprised of two towers. The North tower is known as Sodom, and the South tower is called Gomorrah.

During the outbreak in Las Vegas, the Vegas Bly was hit with a large crowd of shamblers, who attacked the staff and patrons inside. The casino quickly fell to the zombies, and a safe filled with $200 million in cash was left behind. Bly Tanaka's insurance ultimately covered his loss.

A team of safecrackers later tried to break into the Götterdämmerung in the Bly's basement, but were swarmed by shamblers before they could make it to the final chamber.[1]

When a nuclear strike on Las Vegas was scheduled, the military presence was removed from the McCarran Quarantine Zone, which would make it easier for a safecracking team to sneak into the quarantined Las Vegas and break into the Götterdämmerung, acquiring the $200 million that still rested inside. Bly Tanaka hired Scott Ward to do just that, and Scott got the old members of his rescue team, Las Vengeance, back to pull off the heist. They entered the building and used the lobby as a quick home base while breaking into sub-teams to accomplish various tasks. Scott took his daughter, Kate Ward, to the third floor roof to get the backup generators online. Marianne Peters and Maria Cruz headed to the roof so Peters could prepare the escape helicopter, Lilly and Martin checked the perimeter, and Ludwig Dieter, Vanderohe, and Mikey Guzman headed down to the safe. Unbeknownst to the other groups, Martin was using the separation to secretly take Athena's head, which would lead to Zeus bringing the Las Vegas horde to their doorstep, killing almost everyone inside. Kate sneaked out before the horde arrived, while all but Scott and Peters were killed by the rampaging alphas. They left via the helicopter, and Zeus headed out as well. Vanderohe was also still alive, left behind in the safe.

Later that day the nuclear bomb was dropped on the city, destroying the Vegas Bly. Protected from the blast by the safe, Vanderohe emerged in the fallen city and departed the rubble of the Bly.[1] 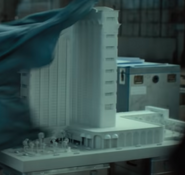 Bly Tanaka's model of the building