Lilly and Ludwig Dieter, Army of the Dead

Athena[1] is the queen of the zombie horde in Las Vegas.

In life, Athena was a Cirque du Soleil performer. She was bitten by Zeus, and became an alpha zombie. She eventually became his queen and controlled the Las Vegas Strip with him.[2]

Martin, Army of the Dead

When the Las Vengeance team made their way into the city, she heard their gunfire and approached to find an offering to the Las Vegas horde. She accepted it and took it to The Olympus for Zeus. Later, hearing more gunshots, she found Martin and Lilly. They pinned her down, and Martin proceeded to decapitate her. He put her still-active head in a bag and carried her along the rest of the mission. Meanwhile, Zeus heard her screams and investigated, finding her body in the street. He took her body back to The Olympus and tore into her torso, revealing that she had been with child.

Concerned with the ethics of removing a zombie head from quarantine, Lilly secretly switched the contents of Martin's bag with a money counting machine. The head now in her possession, when Zeus tracked down the surviving members of the mission she put a gun to Athena's head to give Scott Ward and Marianne Peters the chance to fly away in the rescue helicopter. Staying behind, and attacked by Zeus, Lilly used the last of her strength to throw Athena's head off the roof of Bly's Casino, where it disintegrated into the cement below.[2]

Left behind in her womb after her decapitation, Athena's body held a second-generation zombie fetus. Zeus removed the fetus, which seemingly died in his hands.[2] 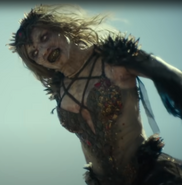