Army of Thieves
Army of the Dead: Lost Vegas

Army of the Dead is an American film directed by Zack Snyder, from a screenplay by Snyder, Shay Hatten and Joby Harold and a story by Snyder and Harold. The film premiered in select theaters on May 14 and on Netflix May 21, 2021.

The film is the first Netflix film to score a wide release at a major theater chain. It played at roughly 600 theaters in total. It was initially intended to be played for only a single week, but due to its popularity some theater chains extended its theatrical run.[1]

The adventure is set amid a zombie outbreak in Las Vegas, during which a man assembles a group of mercenaries to take the ultimate gamble, venturing into the quarantined zone to pull off the greatest heist ever attempted.

Following a zombie outbreak in Las Vegas, a group of mercenaries take the ultimate gamble, venturing into the quarantine zone to pull off the greatest heist ever attempted.

After a zombie outbreak in Las Vegas, a group of mercenaries takes the ultimate gamble by venturing into the quarantine zone for the greatest heist ever.

After an experiment in Area 51 created a monstrosity, a military convoy was tasked with carrying the beast to a new location. They convoy was struck by oncoming traffic, and Zeus was unleashed on the world. He took out the surrounding soldiers before the lights of Las Vegas caught his eye. He headed down into the city, where the people he bit became alphas, and the people they bit became shamblers, until the entire city was in chaos.

Several years later, Bly Tanaka approached Scott Ward, who had successfully survived the Las Vegas outbreak in the past, to offer him $50 million to lead an excursion into zombie-run Las Vegas, crack the Götterdämmerung safe, and escape with the $200 million sealed within. Ward accepted the offer and built a team to head into the city.

Ward's plan was to split $45 million evenly between himself, Maria Cruz, and Vanderohe, who were the "family" group, and would then give his share to his daughter, Kate Ward. They wouldn't tell the remaining members the size of the shares, instead offering them each specific amounts. Marianne Peters would get $2 million, Mikey Guzman would get $500,000, and Ludwig Dieter would get $250,000. Guzman would later cut Chambers in from his own share. Martin was to tag along as Bly's representative, and Lilly was brought in to help them sneak beyond the wall. Kate forced her father's hand and joined the team in order to find her missing friend, Geeta. Lilly convinced them they also needed Burt Cummings, and with that the team was set.

They headed into the Las Vegas Strip, where they crossed paths with the zombie tiger, Valentine. Valentine guarded the outer edges of the alpha horde's territory, so her presence meant they couldn't safely continue. Lilly manipulated Cummings into letting her hold his gun, which she then used to shoot him in the leg. She explained to the others that they wouldn't be allowed to enter the alpha kingdom without playing by the alphas' rules, which included presenting an offering to their queen, Athena. Lilly convinced them Cummings was a worthless person anyway, and revealed her reasoning behind bringing him in the first place. She used his own ties to bind his limbs and waited for Athena and the alpha general to approach. They came and took the offering back to The Olympus, leaving the Las Vengeance heist crew to push forward.

They decided to take an indoor path to avoid flaunting their good will with the alpha horde, and encountered a long building lined with hibernating shamblers. To avoid waking them they kept their lights low, and Scott charted a path through with glowsticks. Martin toyed with the path so Chambers, who was the last one behind him, would end up crowded in with the zombies in the hopes that she wouldn't get the chance to present her worries about his motives to the rest of the group. While she proved much tougher than he initially presumed, Martin's ploy was ultimately successful, and Chambers was swarmed by the undead.

The rest of the group made it to Bly's Casino, where they branched off into four task-based groups. Peters went to the roof to prepare Bly's rescue helicopter for their escape, and Cruz joined her as backup. Dieter, Vanderohe, and Guzman headed down to the vault to crack the safe. Martin and Lilly did a perimeter sweep outside, and Scott took Kate up to the third floor roof to start up the backup generators. With the generators whirring to life, Vanderohe's safecracking team was able to get down to the Götterdämmerung chamber. They began to use shamblers to deactivate the boobytraps. Meanwhile, Martin made a deal with Lilly to capture Athena and take a vial of her blood. If she helped, Martin would ensure the people of McCarran Quarantine Camp were freed from the camps. Upon capturing her, instead of taking her blood, Martin took her head. Athena's death cry rattled through the skyscrapers, alerting the king of the zombies, Zeus, to the event.

Dieter managed to successfully break into the safe, but not before a WBC World News broadcast informed everyone that the nuclear strike on Las Vegas was being pushed up to less than two hours away. They still had plenty of time, so they briefly got lost in celebration. Kate used the excitement as a cover to sneak away and try to save Geeta, while Lilly used the excitement to swap Athena's head in Martin's bag for a cash counting machine in an attempt to prevent Martin from taking the zombie infection beyond the wall. Meanwhile, Zeus found Athena's body and, enraged, sent the alpha horde to attack the human intruders. Bly's Casino was soon filled with alpha zombies, so the heist crew quickly gathered the money and headed for the roof.

Martin was the first through the service hatch, which he closed on Lilly, preventing the others from leaving. Scott and Cruz had already planned to go after Kate before getting tangled up in the alpha horde. Cruz was killed, but Scott went ahead and caught up with Lilly, who had used Vanderohe's saw to cut a hole in the wall to escape. They were joined by Guzman, while Vanderohe and Dieter lingered with the money. Van fought Zeus, but was no match. Dieter created an opening to save Van by hitting Zeus in the head and pushing Van into the safe, but Dieter was caught by Zeus as Van was locked inside. Scott, Lilly, and Guz fought alphas in the main lobby, with Guz taking a bite and taking a crowd down with himself with a grenade. Scott and Lilly were the only two to make it to the roof, where Peters still needed a few seconds with the helicopter. Her delay allowed Zeus to catch up. Lilly pulled Athena's still-snapping head from the bag and held a gun to it. She urged the others to take off without her, and just as she hoped, Zeus stayed behind with her to save Athena. Zeus pinned Lilly's gun arm to a wall with his rebar rod to prevent her from shooting Athena, but Lilly managed to drop the head over the edge of the roof. Scott and Peters headed to The Olympus for Kate, and Zeus quickly followed them back.

While the chaos ensued at the Bly, Kate worked her way through The Olympus in search of Geeta, who she eventually found unguarded. They began to head back down to the ground floor, but were met with the zombies as they returned from the Bly. With Zeus between them and the exit, there was no way out, but Scott arrived on the roof tossed aside the blockage between them and the helicopter. Scott, Kate, and Geeta went to the roof, but Peters had already left. Her conscience got the better of her and she returned, but not before Zeus could catch up and leap into the helicopter behind them. Scott and Zeus fought while Peters flew them from the city. Scott managed to destroy Zeus' brain, but not before being bitten himself. The nuclear missile hit, and the helicopter was caught up in the pressure shift, forcing it to the ground. Peters was killed in the crash, and Scott and Kate both ended up outside the vehicle. Scott spent his last few moments with his daughter, before she had to end the zombie he had become.

Vanderohe later emerged from the rubble with as much cash as he could carry. He wandered from the wreckage of the city, found a car, and headed to Utah. He found a small airport with a private plane he could charter, and he headed to Mexico City. As the plane approached its destination Van realized he'd been bitten.

On June 4, 2008, it was announced that Universal Studios and Warner Bros. Entertainment were on board to co-produce the project. Matthijs van Heijningen Jr. signed on to serve as director.[2] On January 29, 2019, Netflix acquired the distribution rights to the project from Warner Bros., with Zack Snyder returning as director and producer. The Zack Snyder also serves as co-screenwriter with Shay Hatten. The film is based on a story that comes from Snyder and Joby Harold.[3]

On April 5, 2019, it was announced that Dave Bautista had been cast.[4] On May 28, 2019, it was announced Ella Purnell, Ana De La Reguera, Theo Rossi and Huma Qureshi joined the cast. On July 15, 2019, it was reported that Garret Dillahunt, Raúl Castillo, Omari Hardwick, Chris D’Elia, Nora Arnezeder, Matthias Schweighöfer, Hiroyuki Sanada, Samantha Win and Rich Cetrone had been added.[5] On August 14, 2020, Tig Notaro was announced to replace D'Elia, who who was cut from the film following sexual misconduct accusations made against him.[6]

The film entered principal photography in mid-2019, with a reported budget of $90 million said by sources.[3] The movie began production on Monday, July 15, 2019, in Albuquerque and headed to New Jersey to shoot on location in a casino in Atlantic City.[5]

Cinemark, one of the country's biggest theater chains, had agreed to screen the movie. It ran at 200 Cinemark locations, making Army of the Dead the first Netflix film to score a wide release at a major theater chain. The movie played at roughly 600 theaters in total, including iPic, Landmark Theatres, Alamo Drafthouse, Harkins Theatres and Cinépolis.[1]

The limited theatrical release model was so effective that Cinemark has since made similar deals with other made-for-streaming movies.[7]

September 3, 2020, Deadline reported that Netflix has greenlit a prequel feature and spin-off anime series before the film release.[8] The prequel will be directed by Matthias Schweighöfer and will follow his Army of the Dead character “Ludwig Dieter.”[8] The prequel began production in October 2020.[9] and Snyder announced December 22, 2020 that they wrapped production.[10]

The anime will center around some of the characters from Army of the Dead during the early phases of the zombie outbreak.[11]

On July 21, 2021, The Hollywood Reporter reported that Army of the Dead would be getting a sequel that Zack Snyder would develop with Shay Hatten as part of a two year deal between Netflix and Snyder's company The Stone Quarry.[12]

After its first week on Netflix, Netflix reported that 72 million households were expected to watch the film within the first four weeks, putting it on track to become one of their most popular movies of all time.[13] However, the film received 3 million views over this expectation, making it the fifth most viewed Netflix title of all time.[14] 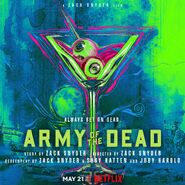 "The trade is off." Athena poster