What's on your mind?

Everyone likes to blame Kate for all the deaths in Army of the Dead, but even in the worst case scenario she's responsible for two deaths. I'm just going to consider who can be blamed for everything for fun.

The players are: Scott, Kate, Cruz, Vanderohe, Peters, Dieter, Guzman, Chambers, Lilly, Martin, and Cummings. I'm not going to entertain the concept that Bly is responsible because he offered the mission, or Scott because he accepted. Yes, no one would die if Scott declined the mission, but everyone here is an adult making their own decisions.

Chambers - First to die, so she doesn't get much chance to get anyone killed. She's partially responsible for her own death (if you think someone is up to something nefarious, it's not incredibly wise to tip them off that you're coming for them when they have an opportunity to do something nefarious to you). Of course, Martin is primarily to blame for her death.

Cummings - First to be removed from the group, and never gets the chance to let anyone down. He technically kills Daisy, but that's a direct result of Lilly's actions, not Cummings'.

Vanderohe, Cruz, Dieter, and Guzman - Professionals who stay on mission and get no one killed.

Lilly - Lilly gets Burt killed right off the bat. The mission wouldn't have moved forward without this sacrifice, but it doesn't change the fact. This also indirectly gets Daisy killed later. She supports Martin in dangerous actions, but doesn't realize how dangerous he's going to be, so isn't responsible. She was also arguably too honest with Kate multiple times, which led to Kate joining the group, then departing it later. This was information that was only likely to be misused by Kate, however Lilly is only directly responsible for one death.

Peters - Mostly a professional who stayed on task, but by leaving Scott then coming back for him instead of simply waiting as long as she could, she created a short delay that allowed Zeus to catch up to the helicopter. Zeus' arrival led to her wound, which prevented her from keeping the chopper under control, causing it to crash and kill herself. This also enabled Scott's death at the hands of Zeus, and potentially killed Geeta in the crash (though her status remains unknown). Peters is responsible for two deaths.

Scott - A professional who stays on task, until his daughter goes missing, at which point he had Peters head to the Olympus. This action put Scott and Peters at risk, though as a result he was able to save Kate and Geeta without getting anyone killed (though Peters fiddled with the process and people died anyway).

Kate - Kate just tagged along for most of the mission. When it came time to act, she took responsibility for herself and didn't involve anyone else. As Scott warned her ahead of time, though, he wouldn't just leave her, so she put him at risk. If Scott and Peters hadn't gone after her, they wouldn't have died, but it was arguably more Peters' fault for leaving them, and Scott's fault for going after her when he could have left her. Of course that'd never happen, but it was, in fact, Scott and Peters who made their own decisions.

Martin - Right away he gets Chambers killed, obviously. Then by taking Athena's head he angered the horde, which would not have otherwise attacked. As a result he, Scott, Cruz, Dieter, Lilly, and Peters died. The only death he wasn't directly responsible for was Cummings'. Martin is responsible for seven deaths.

Army of the DeadKate Ward 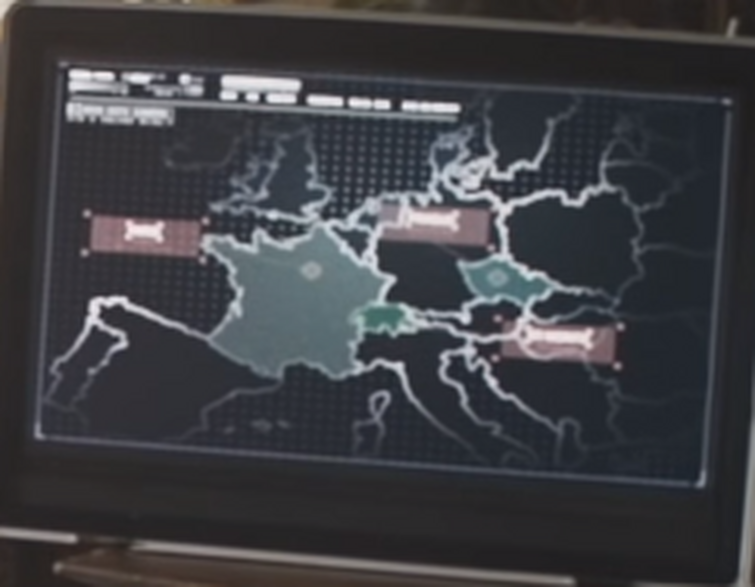 This might not be incredibly interesting to anyone, but it looks like the safe locations are more or less confirmed. Prague is the most obvious, as it's both a filming location they used as well as shown to be a real place where onscreen events are happening, with Prague landmarks shown on screen and the Prague police arriving at the scene. Dieter can be seen heading to the heist in Prague, then wearing the same clothing when facing the Rheingold, which is the first safe they crack, therefore the Rheingold and early heist events are clearly in Prague.

Two other locations are on Korina's screen. That's a map of Europe in the image up there, and the large shaded shape is France. The highlighted circle is Paris (which is also shown in the trailer, and implied to house the Walkurie), while the circle in the smaller shaded country is Prague. The third, north of those two, appears to be Amsterdam, though Amsterdam was neither a location of filming, nor did it appear in the wide shots. I believe Amsterdam is the location of the third safe, the Siegfried. Amsterdam, like Paris, was not a filming location, and it also doesn't appear to show up in the trailer in any recognizable way, but it's the final heist, so maybe they just decided not to show too much from that late in the film.

Hallstatt, Austria is another location whose recognizable skyline appears in the trailer. This could be where Dieter lives. Peter Simonischek is Austrian, which likely has a connection. I would guess he plays Dieter's boss, or something of that nature.

It probably won't go into production until mid/late 2022 or possibly even 2023, but Zack Snyder is returning to direct an Army of the Dead sequel! Separate from this, he's already confirmed a few details about the broad plot, which I believe are in the trivia of Vanderohe's page.

We've just crossed the 200th page point of the Army of the Dead wiki's progress. We're nearing completion now, until more information about future projects comes out! Just a few actors left, the credits transcription, maybe some soundtracks, and that's about it.

Army of the Dead Wiki

Sunday afternoon, July 25 - Army of Thieves will be at Comic-Con@Home. We're getting close to trailer time, so maybe this is where it'll show up! Matthias and Nathalie, as well as The Stone Quarry producers will all be there to introduce us to the prequel heists.

Unless said otherwise, where does it say that the film takes place in that certain year when Peters has an iPhone X/11/12 on her 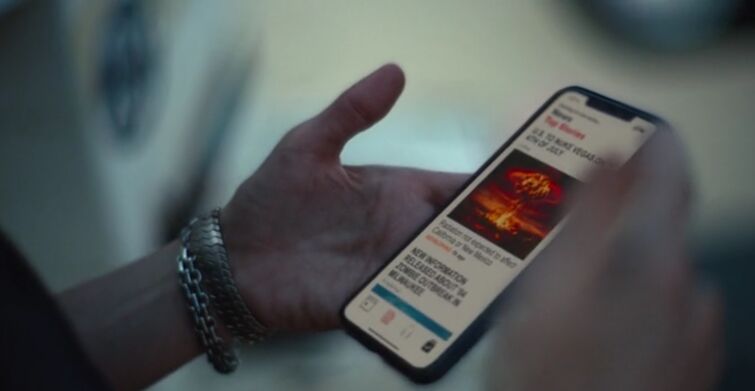 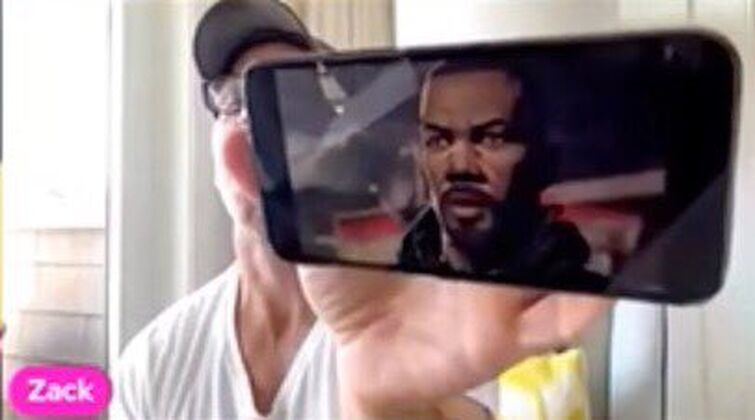 Zack Snyder and his phone. A fan clipped this from the latest Zack Snyder podcast appearance. This is a shot from Army of the Dead: Lost Vegas, the animated prequel series.

Army of the Dead: Lost Vegas

The tactical taco truck is making its way across the country! You can sign up for the VR experience in select cities across the US and globally now. 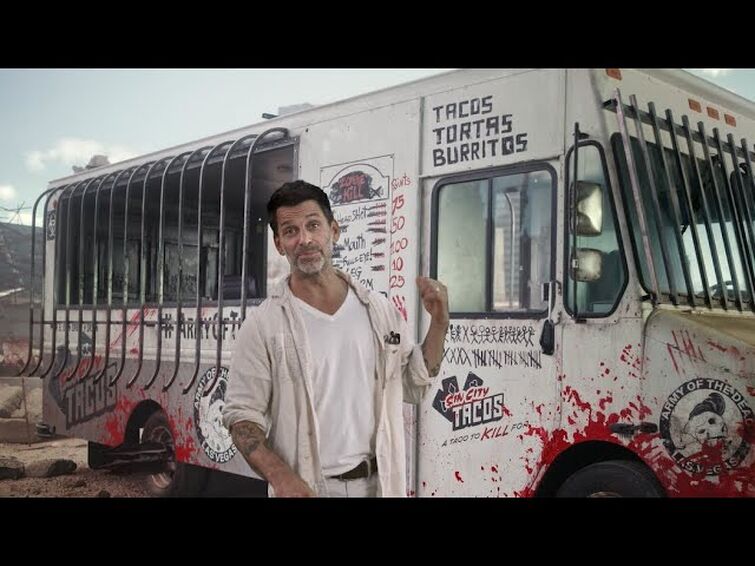 Army Of The Dead - Viva Las Vengeance: A VR ExperienceYouTube 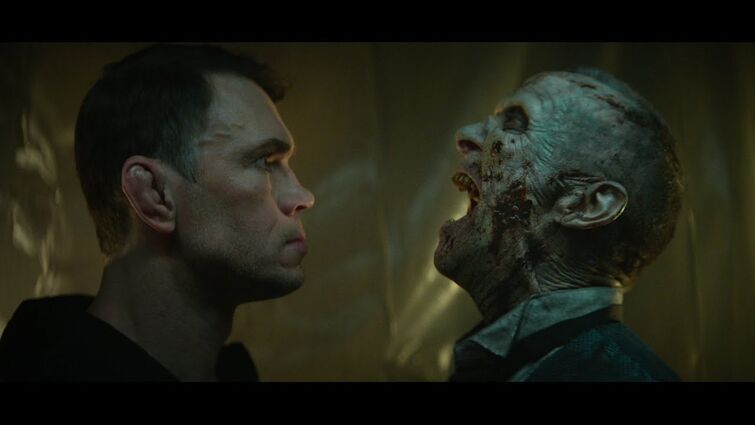 Forrest Griffin vs Army of the DeadYouTube

Released by Netflix to promote Army of the Dead and UFC's "The Reckoning," an officer investigates a zombie fight club where fighters are specially trained to fight zombies.

Forrest Griffin vs Army of the Dead
Guidelines

Help us grow Army of the Dead Wiki